Friday at 7pm, two cars full of newly qualified Ocean Divers and one experienced Dive Leader packed to the rim with SCUBA diving equipment departed from Oxford heading to Chesil Beach in Dorset.  We arrived at the Portland Bird Observatory around midnight, which would be our home for the weekend. Originally, Sofia and Kirsty had planned to pitch a tent on the beach or at a campsite – however they soon decided that pillows one the floor of the reception of our cottage were just as comfortable and a much better option that pitching a tent in the darkness!

Saturday greeted us with plenty of sunshine, mild winds and a calm sea. After unloading our kit at the beach, we set off for the first waves of diving.  Besides plenty of rocks and kelp, we saw several fish (including dogfish!), crabs, and even pieces of an old wreck. Easterly winds in the days up to the trip made sure that we had a reasonable 5 m viz during the dives. Saturday ended with a home-made Best-Of-Tesco-Curry, a continuation of a 3 day long discussion about protein (don’t ask), and Sofia falling asleep in the lounge chair – the latter part leading to yet another tent-less night on the reception floor for Kirsty and Sofia.

On Sunday, Kiril, Farah, and Ryan joined the trip from Oxford, and we all set out to hunt the elusive Royal Adelaide. Royal Adelaide, a cargo ship carrying casks of rum, brandy, and gin bound for Australia wrecked on Chesil Beach in 1872 when seeking shelter from a storm. The wrecking of the Royal Adelaide stands out as almost as many people died on shore as at sea, mainly caused by hypothermia following consumption of the cargo. We were gently reminded of Chesil Beach’s unforgiving pebble environment, when we had to carry all our equipment across the beach and over a dune to reach the shore. Fortunately, the weather on Sunday was overcast making the trek across the dune slightly more bearable.

Armed with the coordinates of Royal Adelaide and a piece of wood on the beach as a starting point, Kiril and Sofia set out to find the wreck and mark it with a surface marker buoy for the rest of us to find. After a bit of searching Kiril and Sofia found the wreck and the rest of us followed afterwards. The wreck was home to a plethora of lobsters, crabs, fish and various wildlife. For the newly-qualified Ocean Divers, this was their first experience of diving a wreck, something that Patrick was particularity excited about.

We ended the day back at the southern part of Chesil Beach diving from the Quiddles Cafe entry point, exploring kelp forest, wildlife hiding under rocks and Lok even got a bit of Sports Diver training done with Kiril. Before heading off for Oxford we engaged in the – apparently – age-old tradition of ending diving at Chesil Beach by sharing a watermelon. We arrived back in Oxford around midnight on Sunday filled new experiences, but also a bit exhausted from the total of 34 dives during the weekend. 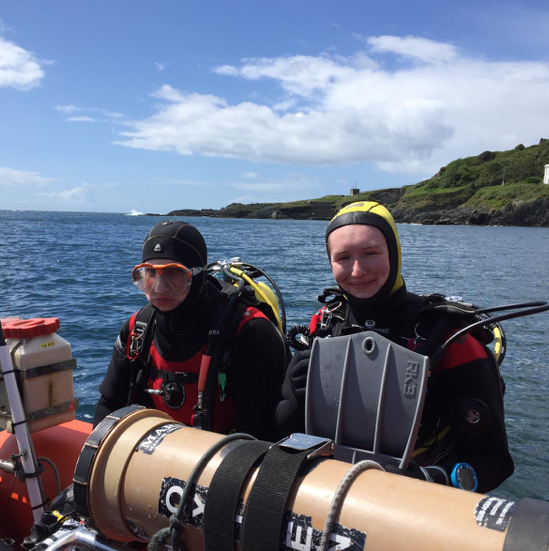 Author: Rona Costello Holger’s deeper diving weekend was planned as a Plymouth trip for those keen to get some deeper diving experience, especially if they’ve not done much deep diving in the UK before. Unfortunately Read more…