This is my first dive report so I’m sorry if it’s awful! It was also my first proper dive trip after ET and was great! Our first dive was from Bovisand on Seahorse to Mewstone Ledge cannon site. After some very dodgy dropping off by Grainne but expert towing we did get in. Interesting kelp and sea urchins which were pretty big and a fantastic purple starfish were some of the things I saw. That afternoon, advised by Peter, we dived the Glen Strathallen, a really cool wreck.

First thing I saw when descending was a massive boiler full of fish! Loads of curious pieces from the wreck and plenty of wrasse particularly some big black and white ones meant the dives were getting even better! The next day we woke to a beautifully calm sea and hopefully a good days diving. This would be the dive where I would finish my Ocean Diver so looking forward to it even more! This was the James Eagan Lane (JEL) a deeper and larger wreck which certainly lived up to the stories from Giles. Going down to 18.8m is was my deepest dive and almost certainly the best. Exploring the wreck was awesome! Some amazing sponges growing all over the beams and even more fish than Glen Strath! Giles and I found a really cool pick axe head which Giles was happy to take plenty of pictures of (posing for me)!

After lunch and Simon only just telling us it was his birthday we left for what was to become the most eventful dive of the weekend at Poulmic.  The sea wasn’t quite as calm and Tom’s driving was hold on tight stuff! All seemed to be going well until Metta starting feeling queasy so she didn’t dive. However this didn’t seem too bad as Giles and Peter when down ok. Then it was Peter and I and… oh dear I was feeling queasy as well. Before he knows it Tom’s got me, Patty (having been snotty all weekend, bad to worse!), Metta and Peter all having bouts of sea sickness. This didn’t improve much when Grainne and Simon resurfaced as Simon joined us. As soon as everyone was back on the boat it was straight back!

Despite the rather unsavoury end a great trip, now I’m an Ocean Diver (and Metta too!)!! 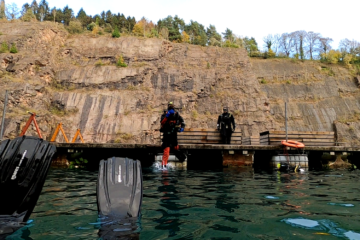 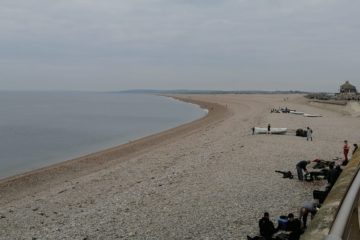 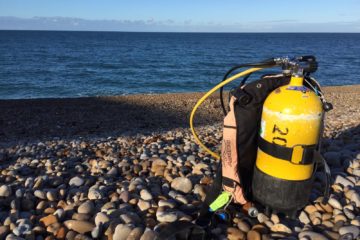